I am a biologist with interests in mitochondrial DNA and sex chromosomes.
I am a learner and a teacher with interests in STEM identity, belonging, and metacognition.
I am an Associate Director of the University of Pennsylvania Center for Teaching and Learning.
I promote inclusion in STEM and higher ed by facilitating belonging and creating accessible education resources.

I’ll keep this post brief and get to the point. Being a student is hard and doing research is often a job with few acknowledged milestones. It can be hard for a student to know when they are doing a good job and external acknowledgement by important others is crucial for the development of science identity.

As a graduate student and teacher, I spend a lot of time introspecting. Since I’ve been applying to jobs lately, I am spending even more time introspecting as I update my CV and write and rewrite job application letters. I recently won an award I nominated myself for. The application process was lengthy, and I was very proud of my application materials. In fact, I was proud that I was brave enough to submit my own nomination and that I met all the minimum qualifications.
I realized that I don’t know how many awards my advisors and mentors have nominated me for. I don’t know how frequently I meet minimum requirements for awards but lose to someone who is slightly more qualified or has a more interesting project. I realized I would love to know each time that I am nominated for an award, even if I do not win that award. To me, just knowing that someone saw an award and thought I was a good fit, and subsequently took the time to nominate me, is meaningful. Further, it is, in my opinion, the responsibility of advisors and mentors to nominate mentees for awards. Knowing which advisors and mentors consistently nominate their mentees would be useful when new trainees are choosing advisors and labs.

So, I wondered: am I the only student who wants to know when I've been nominated? How can I find out if my opinion is commonly held?


My answer, as it often is, was Twitter.
I ran a poll as follows: “Opinion question for students: If your PI puts you up for an award that you ultimately do not win, would you want your PI to tell you that they put you up for the award?”
The response choices were:
1. Yes! It’s a compliment!
2. No, I’d be bummed.
3. I do not care.
4. Not a student/see results

I included the fourth option because non-students might just answer to see the results, which would skew the overall results.
Here’s the link to the actual poll on Twitter:

If your PI puts you up for an award that you ultimately do not win, would you want your PI to tell you that they put you up for the award?@OpenAcademics #AcademicChatter #PhDChat #DisInGradSchool #HigherEd 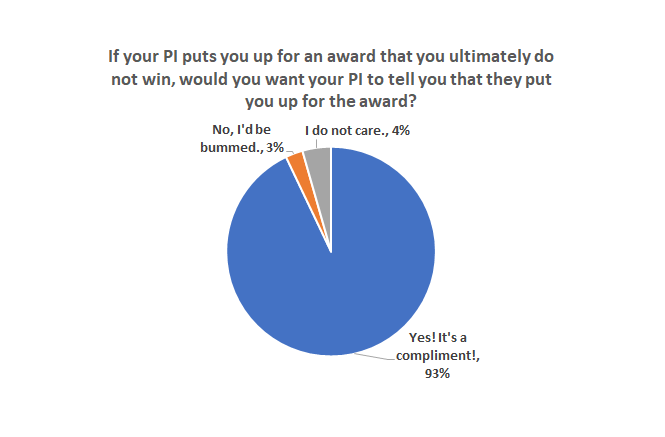 Photo of a one-sheet I made about instructional scaffolding available on my resources page.
So – out of 112 self-identified students, 104 students wanted to be told about an award for which they were nominated, even if they didn’t win that award.*

This was not a rigorous study, so I did not do any follow-up polling or interviews. But I can make a few guesses as to why students want to know and what this tells us about our students.

First, students don’t often get a lot of opportunities for praise. Some advisors provide feedback and might include praise in that feedback, but I more often see feedback that focuses only on what is wrong with student work. This is frustrating for students – how can they know what to keep doing if they are never praised for the “right” stuff?

Second, students endure a lot of failure. I am a biologist, and my experiments fail more than they work. I can go weeks without something working, even while doing everything “right.” Especially during times of hardship, students are buoyed by feedback that tells them that they are doing a good job or working hard.

Importantly, I argue that not informing students about award nominations is harmful. You might think this is a big leap but bear with me. Within the academy exists this impossible conundrum – experiments fail often, articles are rejected more than they are accepted, revise and resubmit is much more common than an outright acceptance, and yet – we hide failures from each other and feel uncomfortable sharing when a grant is not funded, or a job is not offered. Implicit in the unwillingness to tell our students when we nominate them for awards is the expectation that letting students know that they did not win the award is harmful or embarrassing to students. I want to push back against this notion that failure is embarrassing. I am currently on the job market and have yet to land an offer. I tell my lab mates, I tell my advisors, I tell my friends. I tell them that I’m trying hard and not getting that offer and that is okay, because the success is in the attempt.

So, I argue that we should be telling our students when we nominate them for awards.

We should tell our mentors when we nominate them for awards. We should tell each other when we apply for jobs, and get interviews, and don’t get an offer. We should share when we try and follow up when we fail. When a student hears that they were nominated, the vast majority of them will interpret it positively, so we are not doing anyone any favors by hiding this information. In fact, we can normalize failure and emphasize the importance of trying – because you don’t win ANY awards that you aren’t nominated for.

Perhaps a student who finds out they were nominated for an award might get the courage to sign up to give a talk or ask for a guest lecture opportunity. The impacts of this small piece of information can be enormous – so let’s share that information!

*I will note, that as an advisor, you should really ask each advisee what they would prefer so that if you have a student who would be bummed out by learning that news, you would keep the information to yourself.


"There is no innovation and creativity without failure. Period."
- BrenÉ Brown